We have been working on our kitchen for a year now. I cannot believe it has been that long, but it has . We have gotten a bit over half done, but the sink and area around it, still are not finished.

this is our kitchen when we bought the house in 2002 . It was pretty awful,  cheapie ugly faucet, everything was pink  , so pink. Note the ugly grape border in the kitchen and family room. That was the first thing to go !! We also painted all the wood white, that was pink and tried to paint the counter tops black, but that back fired on us as we did it all wrong and it chipped off almost from day one. A nightmare I had to live with for years. Some of these are pictures of pictures.

the faucet was so small  the water would bounce and puddle that is why I had the rolled up towels behind. We later bought a larger, much nicer faucet we are still using today. Not for much longer, soon I will have a counter mount sink and not have a wall mount any more !!

we removed the island eventually as well, it was just not practical. 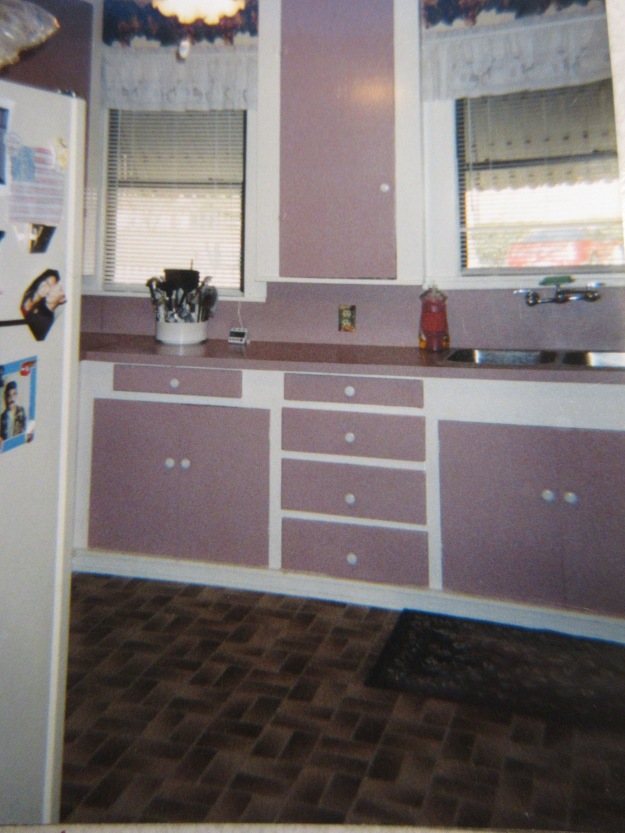 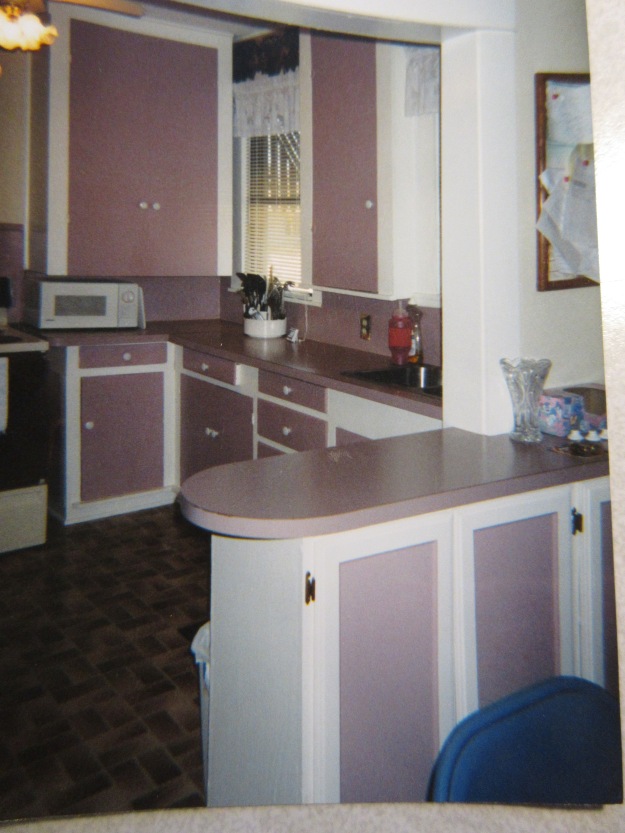 later my husband built the shelf next to the stove for storage and pulled in the door way  between the kitchen and family room so we could eventually put the fridge by that door and move the door over, and put in cabinets on the other side. It was too shallow for cabinets as the excisting ones were much more shallow , too shallow for a built in dishwasher so we have been using a portable dishwasher all this time . Soon we will have a built in for the first time in this houses 90 plus  year history !! There is still a door to the then dining room at this point, but that went later as we made the dining room into a fourth dining room permanantly. We did buy a shiney new stove and fridge at this time, which was 12 years ago in in 2004 . 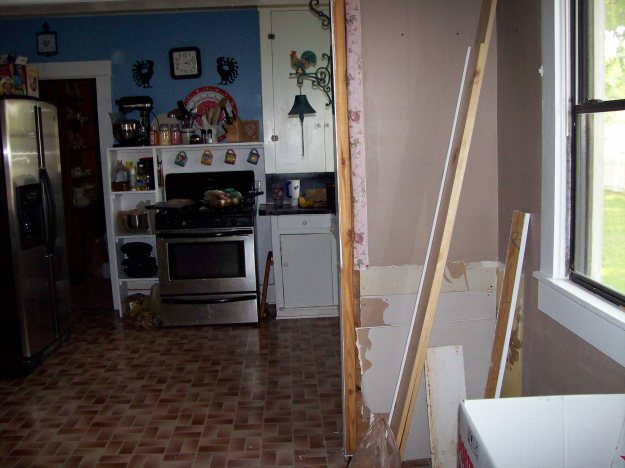 our grandaughters are living in that room  now, our daughter tore out the old pink carpet and carefully restored the pine floor to  better than  new !! We painted the walls green and yellow and painted a raspberry pink chalk board under the window. 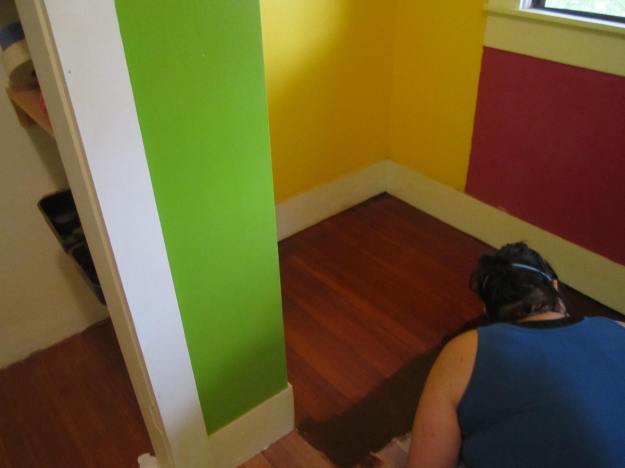 I had never seen a triple bunk bed, but she found one and ordered it, stained it and put it together.

So, it is pretty and new for them while they all live here !! Far cry from the dining room it was when we bought the house !!! 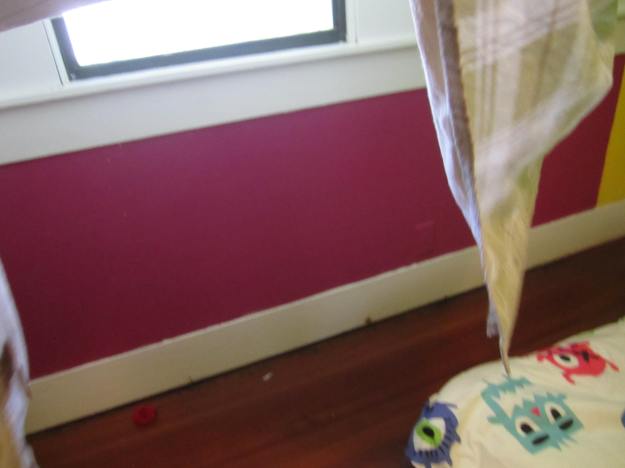 my husband used the orginal door jam for the living room to make the closet door jam. We did have doors on it before our daughters family moved in, but we had moved the bedroom door to open up to the closet so it would not open on to the bunk beads and then we had competing doors. They just have it open and are fine with it that way .

taking down the first old cabinet, which are now using as a base cabinet in our master bath !!

it was so excting to see it come down , little did we know a year later we would still be working on this project !! 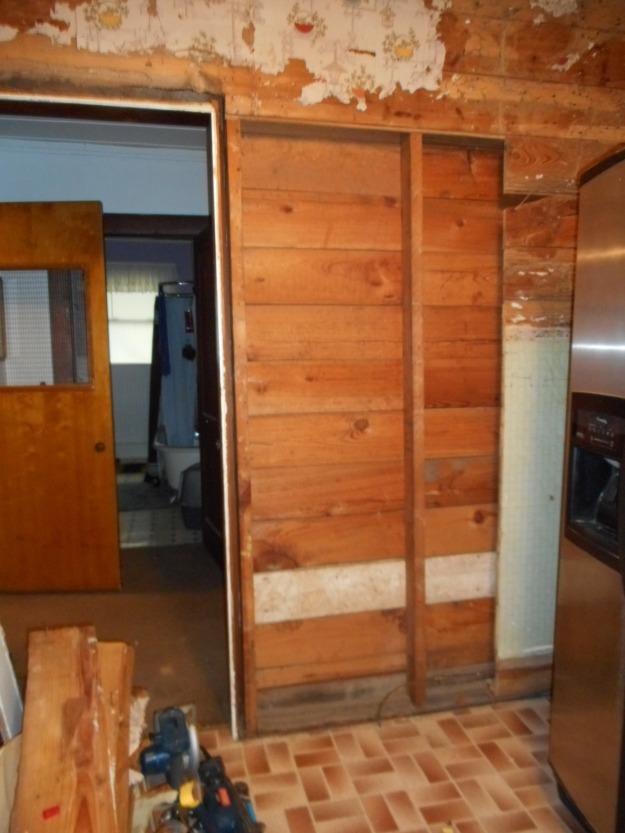 above you can see the old door opening and he has opened up the wall where  the new door will go in the middle of the wall. 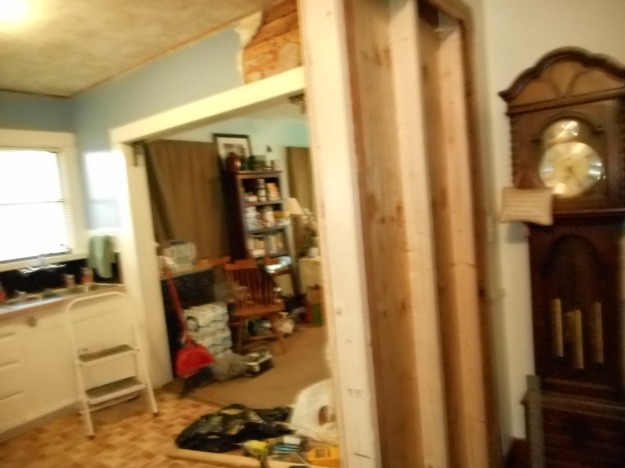 view through the new door !!! wall where the old door jam was !!!

What a mess, with seven people in the house, yikes !! the new door jam is in, the old stove is still in place. Little did we know we woudl be without a stove for months. Oh, we had one, brand new in the box, but not a usuable one. 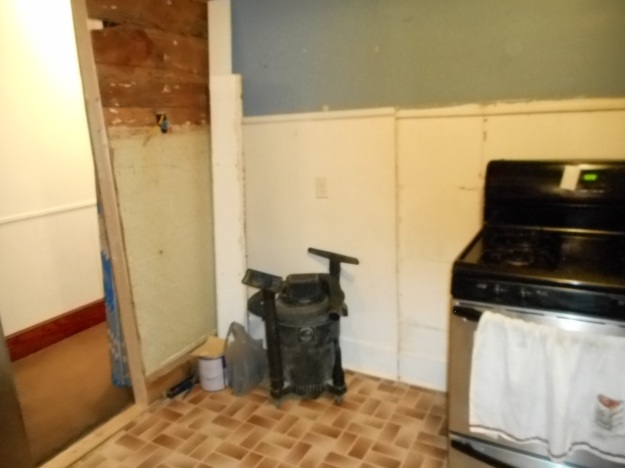 wall down, stove gone, stress level up for all !!!!

next the stove came out,and the real work started !! 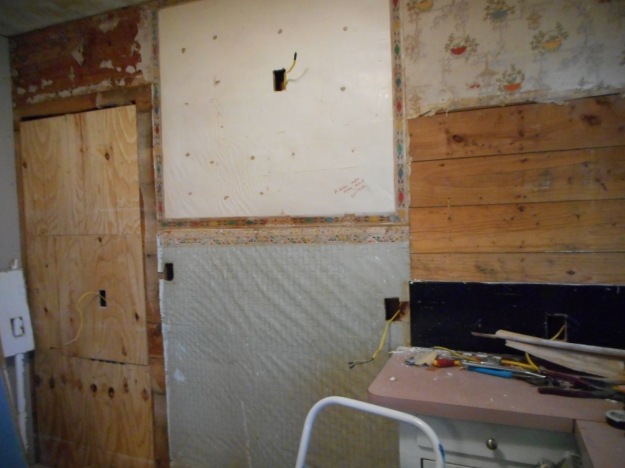 we do have the pretty new fridge in by this point though, so that was fun !!! By now the corner of the cabinets are gone and just the sink/ drawer base is left, and is still there by the way.

I will continue you the story soon, have to take a break. Lots more to share.

Thanks for stopping by !!